This Saturday, Melbourne City Wrestling returns to the Thornbury Theatre for the first time since last month’s historic Ballroom Brawl. With three championship matches, a three-on-one battle, and the chance to hear from the 2021 Ballroom Brawl winner for the first time, the MCW Faithful are already bracing themselves for Fallout!

Mikey Broderick has experienced a resurgence as of late. After an impressive showing against Caveman Ugg at Homecoming and being the Ironman of the Ballroom Brawl for total ring time, the new fitness focused approach to Mikey’s style seems to be paying dividends!

However, no slouch to fitness himself is Anth Cava, who entered the Brawl last month as the second entrant to Broderick’s first. After being dumped over the trop rope by Broderick, Anth Cava has requested a match against his eliminator that will mark his singles debut in MCW.

Will ‘The Universal Swoldier’ squat his way to a victory? Or will Mikey come up short when faced with ‘Absolute Excellence?’

And what of ‘The Influential’ Skylar Cruize? With Cruize seemingly giving respect to Broderick in the latest episode of The Influence, who’s corner will she truly be in come Saturday?

While it took a massive team up to accomplish, ‘The Final Boss’ was eliminated mid-level in last month’s Ballroom Brawl thanks to the combined efforts of Zane Zodiac, Emman The Kid & Tony Villani. However, Jake Andrewartha is out for revenge, and has his sites set on these same men who robbed him of achieving victory!

Zane, Emman, and Tony will find themselves on the other side of the ring come Saturday against a very angry Jake in a situation where arguably, despite the numbers advantage, they are the underdogs! Will the combined efforts of Zane, Emman, and Tony be enough to defeat ‘The Final Boss’? Or does this encounter spell Game Over for the trio?

A CeleBRATion for the Ages!

The final few minutes of the 2021 Ballroom Brawl were nothing short of historic. While it looked like it was down to the final two competitors, a shocking 21st entrant appeared in the form of freshly minted Australian Wrestling Legend ‘Loverboy’ Lochy Hendricks. However, despite being the fresher man, Hendricks was eliminated by Mitch Waterman, officially cementing Mitch as the 2021 Brawl winner!

As Waterman’s Tag Team Partner Nick Bury’s social media accounts attest, the celebration has been non-stop these past few weeks. The culmination will be this Saturday, where the MCW Faithful will take part in an official celeBRATion! What will The Brat Pack have to say? Will Mitch give an indication of what he plans to do with his guaranteed World Title shot? And will anyone’s liver truly survive the evening?

If anyone has a valid grievance in how the Brawl unfurled, it would be Ritchie Taylor. Having earned his right to enter as the 20th entrant in the Brawl, Taylor was blindsided by Lochy Hendrick’s abuse of power and his insertion into the match at number 21. While ‘Loverboy’ eliminated Ritchie from the match, Taylor’s showing at the Brawl was enough to be granted a title match against Caveman Ugg at Fallout!

Never one to look in the rearview mirror, ‘Smashmouth’ will walk into the ring on Saturday fully focused on his first opportunity at championship gold in MCW. However, ‘The Jurassic Juggernaut’ has racked up a series of impressive title defenses and will be looking to add Taylor to that list.

Will ‘Smashmouth’ Taylor roll on into the moniker of NEW MCW Intercommonwealth Champion? Or will the Ugg Era never go extinct?

Last month, Kellyanne picked up a win against Jessica Troy in what was undoubtedly the hardest hitting match of the evening. While Kellyanne has always been known for her intensity in the ring, 2021 has already seen the leader of ‘The Fiend Club’ turn the dial up even further!

The laser focus of Kellyanne will be put to the ultimate test at Fallout, when she comes face to face with a woman that she has not beaten in over three years: the MCW Women’s Champion Avary!

Avary has established herself at the top of the women’s division in MCW, having defeated a who’s who of talent from around the globe. Yet, despite the victories Avary holds against Kellyanne, this may very well prove to be her toughest challenge as champion yet!

Will Avary continue her reign as Queen? Or will Kellyanne clip the wings of ‘The Bin Chicken’?

To the current Champion, ‘Legacy’ is not just a catchphrase. It is a goal, an ambition, a code by which Adam Brooks has guided every action he has taken since winning the belt. As Brooks informed the MCW Faithful last month, the title he carries with him is one that he intends to defend all over the world when the world lets him, furthering his legacy as the ‘Greatest Ledge Of All Time’.

However, standing in the way of that legacy is a pioneer. When one talks about the great lineage of MCW Champions, it literally begins with Danny Psycho, the inaugural title holder. Psycho made it very clear to Brooksy last month that he remains unimpressed with his reign and intends to become a two-time champion at the expense of Brooks’s legacy!

Will Adam Brooks be able to conquer the past? Or will the MCW World Championship fall into the hands of a Psychopath?

It all comes to a head this Saturday at Thornbury Theatre! Witness the Fallout for yourself! 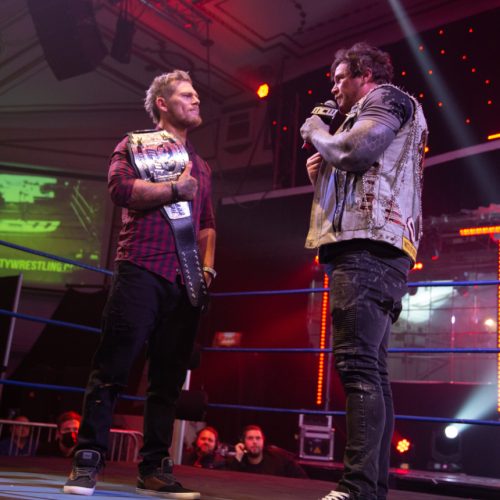