There is a common saying in the business of professional wrestling: “It aint ballet”.

This phrase isn’t meant to diminish those who dedicate their life to dance, but rather highlight the fact that, despite certain preconceived notions of the general public, people who step foot in the ring can, and do, get hurt. Injuries linger. Pain is felt. And careers can be ended in the blink of an eye due to one wrong move.

While certain transgressions inside the squared circle are inevitable, the pain inflicted between two opponents can leave wounds that go deeper than what’s seen on the surface.

For the MCW roster, certain wounds have been festering for quite a long time. Scores need to be settled. Titles need to be fought for. And personal wars need to come to a climax as these spectacular athletes enact their Vendetta!

Last month at Fusion, four individuals progressed to the next round of the inaugural Ascension tournament. This Saturday, both Emman the Kid and Jarvis have the opportunity to join this quartet of winners when they square off against each other in a first round A-Block matchup!

Emman The Kid is no stranger to performing in front of the MCW Faithful at Thornbury Theatre; competing in numerous matches with varied opponents. Newcomer Jarvis is a bit of a wildcard, but what he lacks in MCW experience he makes up for in raw talent and confidence, claiming that this is “his time, his tournament”.

Will Emman leave Thornbury with another spectacular outing under his belt? Or will Jarvis have The Kid’s number?

Jake Andrewartha claims he is “The Final Boss” of pro wrestling; that being the seemingly impossible obstacle to get through to be able to call yourself a winner. For Mars Morgan, this Saturday finds himself in the unique situation of facing The Final Boss in the very first round of this tournament!

Jake has made it clear he believes himself the eventual winner of this tournament. Morgan has the chance to challenge that perception.

Will Andrewartha have the upset pulled on him by this new challenger? Or is it a grim Game Over for Mars?

The Bastard Brothers will be in Action

At Rite of Passage, KrackerJak overcame the odds and defeated his baby brother GORE, officially reinstating him as an Australian Wrestling Legend after being out of the ring for 4 years!

Being a Legend comes with certain privileges, privileges that Krackerjak was very quick to enact with his decree of forming “The Bastard Brothers” tag team!

With MCW Management entering GORE and Krakers into competitions this Saturday, those in attendance will have the chance to see what the combined forces of these two behemoths can do.

What does the team that awaits The Bastard Brothers have in store for them, and will the Tag Division of MCW be put on alert?

Royce Chambers has very quickly established himself as a cornerstone of the Melbourne City Wrestling roster. When the Intercommonwealth Champion steps into the ring, the MCW Faithful are fully behind him; in every step, in every move, with every heartbeat.

Similarly, Mick Moretti’s presence in Pro Wrestling Australia is equally as important to its foundation. The Rapscallion has always boasted about being “The Soul of PWA”, and recently won the Title to prove it.

On Saturday, April 9, it will be Heart vs Soul, winner take all as Royce Chambers puts his Intercommonwealth Championship on the line against Mick Moretti’s Soul of PWA Championship!

Last month, The Filip Brothers engaged in the ultimate act of disrespect by not even bothering to show up to the Thornbury Theatre due to the perceived lack of competition available to them.

In a video package played to the incredulous MCW Faithful, Tome and Stevie verbally tore apart the entire division they stand atop of, telling management they wouldn’t return until suitable challengers are found.

Their request has been answered in a huge way, as The Velocities will once again square off against a team they hold a victory against!

Jude and Paris have held championship gold, but not in MCW. They will get their long awaited chance to change that this Saturday. Will The Velocities soar to new heights? Or will The Natural Classics leave their opponents in the dust after dishing out their Greatest Hits?

With every encounter between Slex and Rocky Menero, outside forces have somehow intervened. But all that is about to change.

At The Thornbury Theatre, the Vendetta these two men have against each other will have nowhere to be waged but inside the confines of a Steel Cage!

Limited tickets are available at MCWTix.com.au 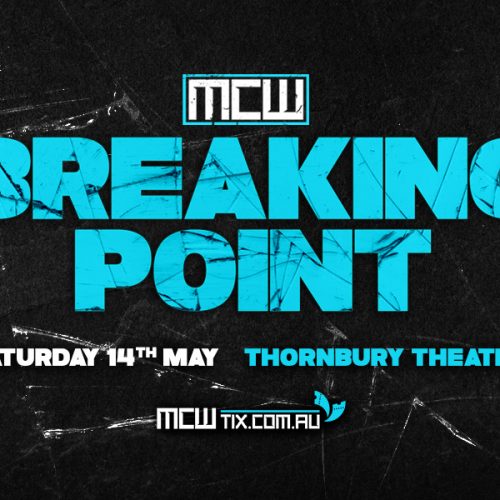